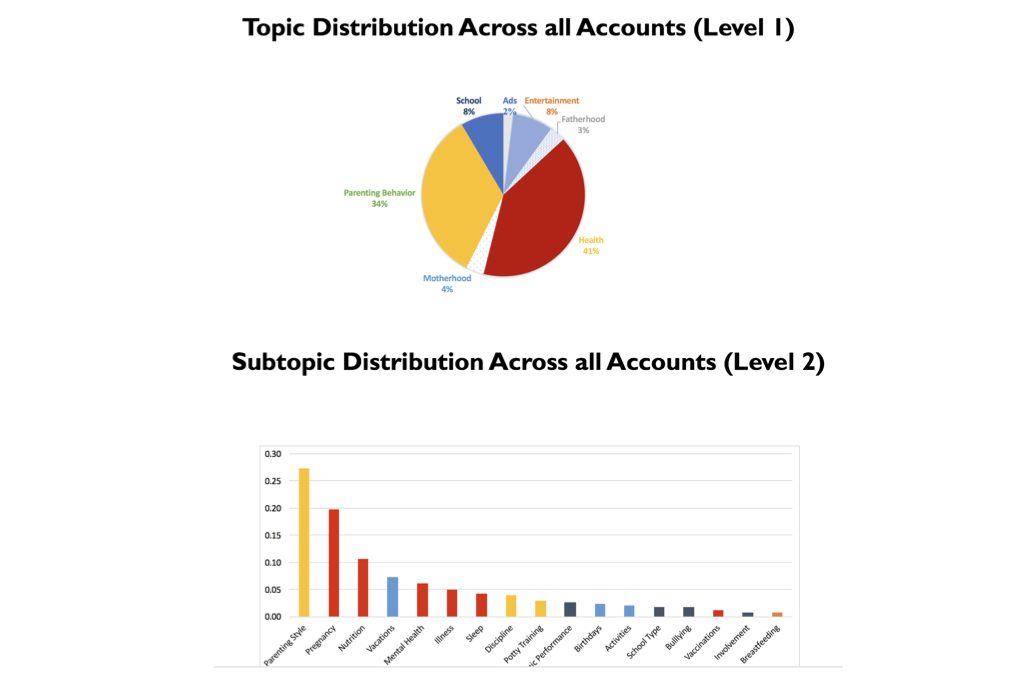 Researchers affiliated with S3MC gave several presentations at DEVSEC: Conference on the Use of Secondary and Open Source Data in Developmental Science in Phoenix, Arizona, October 4-6, 2018.

Poster Presentation: What are Parents Talking about on Social Media? A Topic-modeling Approach to Analyzing Twitter Data

Over the past 30 years, parenting behavior and practices have changed dramatically in the U.S. For example, parents today invest more time and more money in their children’s enrichment than they did in the “family-oriented” 1960s (Kalil, Ryan, Ziol-Guest, & Markowitz, 2016; Kornrich & Furstenberg, 2015; Sayer, Bianchi, & Robinson, 2004). The rise of social media offers developmentalists an unprecedented opportunity to observe parenting behavior as it is changing and, at the same time, gain insight into how parenting beliefs might inform those changes, for three quarters of parents in the U.S. use some form of social media, and the vast majority of those use it to receive and share information and opinions on parenting (Burke, Adamic, & Marciniak, 2013; Duggan et al., 2015). Before developmentalists can use this new data source, however, we need to identify which parenting topics are discussed on social media, how frequently those topics are discussed, and who is primarily discussing them. Our interdisciplinary team, composed of developmentalists, survey research experts, and computer scientists, are gathering a large corpus of social media content from one of the only publicly-available user-declared networks: Twitter. We collected two types of data using the Twitter Application Program Interfaces (APIs): 1) tweets associated with the 10 most popular Twitter accounts that give parenting advice, e.g. Parenting Magazine, ScaryMommy; and 2) tweets from 5,000 random followers of those accounts, both from March 2016 to February 2017. To model the topics, we began with a customized variant of Latent Dirichlet Allocation (LDA) that only maintains words in topics with a higher probability of occurrence across sites, thereby removing some noise. Experts on our team then looked at those generated topics and aggregated meaningful ones into parenting topics. Preliminary results indicated that parents are getting and sharing information on a number of well-researched parenting topics, in addition to topics not typically covered in surveys but that are nonetheless relevant to public health, child development, and education policy. Figure 1 lists the topics and displays their proportion across all tweets posted to Twitter accounts associated with 10 popular parenting sites (with follower counts ranging from 292,000 to 3.5 million). Excluding the “other” category, the topics account for 50% of the tweeted content of each account. The three most discussed topics tweeted about across all 10 parenting Twitter accounts are safety, school, behavior/discipline.

Nearly all of what developmentalists know about parenting in the U.S. comes from survey or observational data. Recently, social scientists in other disciplines have turned to “big data” from social media to learn about people’s attitudes and behavior in a variety of domains. On social media, large numbers of people share information about naturally-occurring beliefs and behavior. Investigating parenting from social media, therefore, could offer a new avenue for developmentalists to track parenting beliefs and practices on important parenting topics. The present study draws data from Twitter to investigate what people interested in parenting believe about breastfeeding. It uses Twitter data because one quarter of parents who use social media use Twitter (Duggan et al., 2015), and because unlike other user-declared networks (e.g., Facebook), Twitter is used to disseminate information freely (i.e., it does not require mutuality between two users to subscribe). The study examines breastfeeding because it is a topic about which the scientific community shares conventional wisdom, but about which popular opinion is mixed (Quigley et al., 2012; Mezzacappa & Katkin, 2002; Meyers & Chawla, 2000); however, one quarter of U.S. mothers do not breastfeed and less than half breastfeed for the recommended six months (Center for Disease Control, 2014). To explore beliefs about breastfeeding through Twitter, an interdisciplinary team first gathered over 40 million tweets from the top 10 parenting-blog Twitter accounts (based on follower numbers) from March 1, 2016 – December 31, 2017 using the Twitter API. This bulk data was run through two state of the art algorithms for topic modeling, Latent Dirichilet Allocation (LDA) (Blei et al., 2003) and a variant of LDA that was developed for tweets (Zhao et al., 2011), to identify discrete “topics” on each account. This categorization process identified breastfeeding as a tweeted topic, and where (which account) breastfeeding was a topic, the frequency of that topic, and the frequency of terms associated with breastfeeding. Breastfeeding was a tweeted topic on five of the 10 sites (whereas child and mother nutrition, for example, were topics on nearly all). The most commonly tweeted breastfeeding-related terms were “breastfeeding,” “breast” and “#nutrition”. Next analytic steps will include examining full tweets for both stance – if the tweet discusses the positive, negative, or neutral aspects of breastfeeding – and sentiment – what emotion is used in the tweet (positive, negative or neutral) to assess the nature and content of social media dialog about breastfeeding and how that content varies by source (i.e., handle or site).

Paper Presentation: Parenting Information on Autism and Vaccinations on Twitter

In recent years, Twitter use has skyrocketed, with 23% of online Americans on Twitter (Duggan, 2015). A surprising number of parents also turn to social media in search of parenting advice, information, and answers to questions – 75% of parents use social media, and 59% of parents report they have found parenting information while doing so (Duggan, et al, 2015). This makes it increasingly important that research on parenting includes social media as a potential source of that information. This project considers a single case study, that of autism and vaccinations, as a first step to understanding the vast landscape of parenting information on social media. The case study was chosen because of its high salience as a topic in parenting, and more broadly in the American media environment (Nixon & Clarke, 2013; Smith, et al, 2008; Speers & Lewis, 2004). To do so, we have refined a method to identify and categorize parenting information on Twitter. We access the Twitter ‘garden hose’ (a random 10% of all Twitter content), and then scrape that content based on a purposive list of parenting websites and topics. This list is generated from three types of seed content: 1) Twitter handles (i.e., Twitter accounts that give parenting advice, like Parenting magazine); 2) hashtags (those related to parenting like #parenting, #kids, etc); and 3) key words (like parent, kids, my child, etc). For each Twitter handle, a random sample of 5,000 followers is also taken and their tweets scraped. This corpus of content was then examined using topic modeling, which uses algorithms to sort words and phrases by their co-occurrence and relevance to one another. Initial results suggest that the frequency of discussing autism and vaccinations on these Twitter accounts varies dramatically, ranging from .6% of conversation on PBS Parents’ Twitter account to 15.7% on WebMD’s Twitter account. In general, conversation about autism and vaccines is more frequent than conversation about child illness, but less frequent than topics like school, child safety (things like car seats, recalls, etc), and child behavior (misbehavior, discipline, etc). Next analytic steps will include examining full tweets for both stance – if the tweet discusses the positive, negative, or neutral aspects of breastfeeding – and sentiment – what emotion is used in the tweet (positive, negative or neutral).